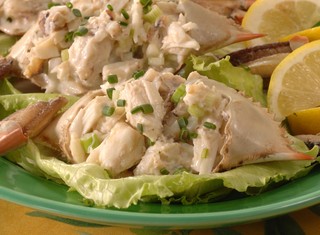 Classic Crab Salad Served the the back shells. Photographed by John Carrington Photography

While lingering with friends at our table after dinner recently, the discussion turned (as it often does here in the South) to food. And as we began to share some Lowcountry specialties with a member of the party who’d recently moved to the South from New England, I was given a sharp reminder of how singular our experiences with food can be.

Crab salad was mentioned as a summer staple here in the Lowcountry, whereupon a young, born-and-bred Savannah friend interjected with authority that crab salad wasn’t a universally-enjoyed staple, but a humble ethnic dish confined almost exclusively to the African-American community.

Well. Never mind that crab salad is frequently found on my own table: That pronouncement would’ve been quite a shock to the many well-heeled Savannah hostesses both white and black at whose tables I’ve enjoyed it over the last four decades.

Actually, it’s been popular with locals of all ethnic and socio-economic backgrounds for the better part of two centuries. When George Wymberley Jones De Renne entertained some of Savannah’s elite society with a picnic back in 1878, crab salad was one of the dishes in the hamper. But my young friend hadn’t grown up with it, and had only seen it served in the homes of African American friends, so that was that.

It was a sharp reminder that the narrow lens of our own experience is just that—narrow, and may not always be the most reliable tool to use for understanding the bigger picture. Sometimes—actually, most of the time—we all (myself not excepted) would do well to take a step back and look at things from a perspective other than our own.

Well, from any perspective, what really matters with crab salad is having it made well. And to do that, you need freshly-cooked and picked local crabmeat. It can of course be (and frequently is) made with those tubs of pasteurized meat that nowadays are widely available, but while pre-picked meat is convenient, and the salad won’t be bad, pasteurizing adversely affects the taste of crabmeat, leaving it with only a ghost of the flavor that it originally had. You should make it with fresh crab at least once, just so that you know how truly wonderful it can be.

Luckily, the time we want crab salad is also when crabs are seasonal. Although recreational crabbing is allowed in Georgia year round, their real season is summer, when they’re at their largest, meatiest, and most plentiful. Yes, cooking and picking crab is tedious work; but when you taste it, I can promise you’ll believe it was worth it.

The lovely salad that follows is adapted from several old Savannah community cookbooks, at least one of which offered the charming suggestion included here of serving the salad piled in the bright orange-red back shells. If you’re using packed crabmeat, serve it on large scallop shells or lettuce leaves.

1. If using already picked meat, pick through it for bits of shell and skip to step 3. If using fresh, live crabs, bring 4 quarts of water to a boil in an 8-10 quart, covered pot. Add a small handful of salt. Using long tongs, carefully put in the crabs face first, push them under the water’s surface, then cover, and bring back to a boil. Uncover and simmer until they’re bright red, about 15 minutes. Immediately drain and rinse in cold water to arrest the cooking.

2. To pick the meat, you’ll need a sharp, heavy-handled knife, claw crackers, and patience. Twist off the claws, legs, and swimmer fins. Flip the crab over onto its back and grasp the belly shell at the mouth and pull the body away from the back shell. Remove the gills (in the Lowcountry they’re called “dead man’s fingers”) and cut off the knuckle joints where the legs join the body shell with the knife. This will get a lot of the cartilage out of your way. Break the body in half and gently squeeze from the center of the back out. The lump meat will come out in large pieces. Crack the claw shell with a cracker or by tapping it round and round with the knife handle. Pull out the cartilage and pick off any shards of shell. The legs have very little meat in them, but some local cooks will poke the meat out with a narrow skewer. Choose 4-6 of the best back shells, and thoroughly rinse and dry them.

3. Combine the crabmeat, celery and onions in a glass or stainless steel bowl. Season well with salt and a pinch or so of cayenne. Fold in the mayonnaise a little at a time until the crab is lightly, but thoroughly, coated. You may not need all of it.

4. If you have them, the salad into the reserved shells, mounding it at the center. Arrange the lettuce on a platter and arrange the filled shells on it in a pinwheel pattern, or put them on individual salad plates. Sprinkle with parsley or chives, garnish with lemon wedges and serve.