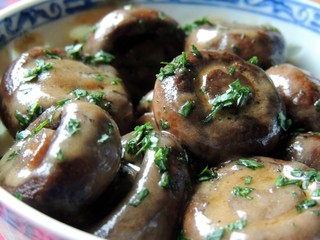 Aside from roasted goose in parts of England, there’s not a lot of food that’s connected with Michaelmas. But among the flavors that speak of autumn for me are mushrooms: in soup, sauce, over pasta, rolled in an omelette, or just on their own, sautéed in butter or, as the early nineteenth century doyenne of Southern cooking, Mary Randolph, directed, stewed in their own juices:

“Gather grown mushrooms, but such as are young enough to have red gills; cut off that part of the stem which grew in the earth, wash them carefully and take the skin from the top; put them into a stewpan with some salt, but no water, stew them till tender, and thicken them with a spoonful of butter mixed with one of brown flour; red wine may be added, but the flavour of the mushroom is too delicious to require aid from any thing.”

This sensible recipe, which takes advantage of the fact that mushrooms sweat out their moisture when salted, was by no means unique to Mrs. Randolph. Variations of it were common in period cookbooks. Here in the South, Mrs. Bryan (The Kentucky Housewife, 1839), added “a very little sweet cream,” (which seems to have been for her what salt and pepper is to the rest of us). Mrs. Hill (Mrs. Hill’s New Cook Book, 1867) added “a tablespoonful of vinegar” (adding touch of acid, either vinegar or lemon juice, as a flavor booster was common) and pepper. Some recipes included both cream and acid as well as nutmeg and a couple of them specified an iron saucepan.

The fungi Mrs. Randolph described above are Agaricus Campestris, or common field mushrooms. Also known as “meadow mushrooms” they were plentiful in those days. Mrs. Bryan observed, “They are found in abundance during the months of August and September, more particularly after a misty night or heavy morning dew.”

They’re also some of the easiest wild fungi to identify, which is probably why they’re the variety most often mentioned in period cookbooks. Field mushrooms are close relatives of the cultivated white (champignon) and brown (cremini) mushrooms that are common in our markets today, and both happen to take very well to Mrs. Randolph’s exquisitely simple recipe.

I never peel the caps of commercial mushrooms, but if you want to be absolutely true to Mrs. Randolph, the outer skin can be pulled off with a small trimming knife. Unlike a sauté, you don’t want the liquid that the mushrooms naturally exude when salted to evaporate, so the secret is to keep the heat low enough so that doesn’t happen, but warm enough for the mushrooms to simmer lazily. If you’ve let it get too warm and the pan gets a bit dry, splash in a little water. Mrs. Randolph did not, as we’ve seen, mention garnishing the dish with parsley, but it does liven them up for serving and adds a subtle flavor.

Browned flour was a staple in kitchens of Mrs. Randolph’s day. It’s simply flour that’s been toasted to a uniform golden-tan in a hot cast iron pan. Since it’s not common in our kitchens nowadays, I’ve given directions for doing the amount called for in the body of the recipe here.

1. Wipe the mushrooms well with a dry cloth or paper towel. I you must wash them, do it quickly and spread them on a towel in a single layer and let them dry completely—at least half an hour. Trim the stems even with the caps and discard or set the stems aside for the stockpot or a sauce.

2. Put the mushrooms in a heavy-bottomed saucepan or braising pan that will hold them snugly in a single layer. Sprinkle lightly with salt, cover tightly, and let them sit of a minute or two, then put the pan over medium-low heat. When it’s hot, lower the heat and let the mushrooms stew gently, occasionally shaking the pan, until they’re tender, about 20 minutes. They should produce a good bit of liquid. If it begins to bubble too much or dry out before the mushrooms are done, replace it with a splash of water and lower the heat even more.

3. While the mushrooms stew, put the flour in a dry skillet over medium-low heat. Toast it, stirring often, until it’s a uniform tan. Turn off the heat, let it cool, and then mix it into the butter.

4. When the mushrooms are done, stir in the butter and browned flour and simmer until the juice is lightly thickened, about 1-2 minutes longer. Turn off the heat, taste and adjust the salt, and transfer to a serving bowl. If you like, sprinkle them with parsley and serve.