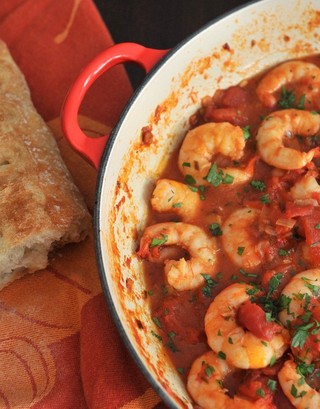 Shrimp Stew with Bacon and Tomatoes, the perfect warm-up for welcoming Autumn in Savannah. Photography by Rich Burkhart

It doesn’t often happen, but the first day of autumn was met here in Savannah with a hint of genuine coolness in the air. It’s not quite chili, pot roast, and hearty stew weather, but the suggestion that it is on the way is an unexpected gift that’s not to be ignored.

I can think of no better way to meet the season than with this lovely stew, which handsomely straddles the sometimes awkward transition. Although we tend to think of shrimp as summer food, since that’s their peak season, here in Savannah they’re seasonal until at least November and sometimes through Christmas.

The cooling shrimp cocktails, salads, sautés, stir-fries, and even that sturdy old stand-bye Shrimp Creole that got us through the dead heat of summer no longer seem to satisfy quite as they did. We start looking for warmer fare, and this stew, with its robust, autumnal seasonings of rosemary, bacon, and shallots, is just the thing.

1. Peel the shrimp, reserving their shells, cover, and refrigerate. Put the shells in a heavy-bottomed enamel or stainless-steel saucepan with 4 cups of water. Bring to a boil over medium heat, skimming the foam as it rises, and reduce the heat to a gentle simmer. Simmer until the liquid is reduced to 1 cup. Turn off the heat and strain the broth, discarding the shells.

2. Sauté the bacon over medium heat in a large, deep-sided, lidded skillet or braising pan until golden-brown. Add the shallots and sauté until translucent, about 3–4 minutes. Add the garlic, anchovy, hot pepper, and rosemary and bay leaf, and 1 tablespoon of the parsley. Sauté until fragrant, about half a minute more, and add the vermouth. Bring to a boil, stirring and scraping the pan, and boil until the vapors no longer sting.

3. Add the broth (made from shells) and tomatoes; season to taste with salt. Bring to a boil and reduce the heat to a steady simmer. Cook until the sauce is thick, about 30 minutes. The stew can be made ahead to this point. Cool, cover, and refrigerate if you’re making it more than an hour ahead. Reheat gently over medium-low heat before proceeding.

4. Raise the heat to medium, add the shrimp, and bring to a simmer. Cover, lower the heat, and cook slowly, stirring occasionally, until the shrimp are just curled and pink, about 5–7 minutes. Turn off the heat, swirl in the butter, sprinkle with the remaining tablespoon of parsley, and serve hot with rice or crusty bread.