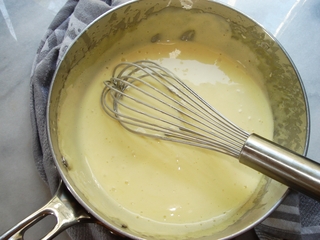 Over the last few years, there’s been a big fad for roasted asparagus. There’s nothing wrong with cooking this lovely vegetable in the oven, but it has become so commonplace that it’s in danger of being—no pun intended—overdone.

The preoccupation with one method has also made us forget that it’s not the only good way to cook asparagus. And, anyway, it isn’t always appropriate or practical.

At Easter the oven is almost always otherwise engaged and, anyway, there’s already roasted lamb and gratinéed potatoes: if the asparagus was cooked the same way, it would make for a pretty monotonous plate. That’s why I much prefer to revisit that timeless classic, Asparagus Hollandaise: it’s festive, fast, and colorful.

The asparagus is quickly cooked in lots of salted water to preserve its color and texture, then drained, turned out onto a platter, and lightly garnished. The Hollandaise is passed separately rather than drizzled over the platter.

I cook asparagus in a wide, shallow pan such as a lidded sauté pan. It has room to spread out and therefore cooks more quickly and evenly—usually in just two minutes (depending on the asparagus). Use the lid to drain it, then turn it directly from the pan onto the platter. It’ll look as if you went to some fancy food-styling school.

1. Choose a large, lidded skillet or sauté pan that will hold the asparagus in no more than two layers. Add enough water to come up the sides by an inch, cover, and bring it to a boil over high heat.

3. Put on the lid slightly askew (to hold the asparagus in the pan) and carefully drain off all the water. Turn the asparagus out onto a serving platter. If you like, scatter parsley over it and serve immediately, passing Hollandaise sauce separately.

Though careless journalists and popular histories often claim that Hollandaise is a fairly modern addition to American tables, it has been around since at least the mid-nineteenth century. I suspect that some of the folk historians have forgotten that the word Hollandaise is just French for “Dutch.” Recipes titled “Dutch sauce” were fairly common, and as for their being used in America, English writer Eliza Acton (Modern Cookery for Private Families, 1845) even called a variation of this sauce “Cold Dutch, or American Sauce.”

This is not, however, a historical recipe, but the classic as it is made in French kitchens today.

1. Have the bottom of a double boiler ready with simmering water. Combine the egg yolks and water in the top pan. Whisk until the mixture is smooth.

2. Place the upper pan on the lower half, over, but not touching, the simmering water. Whisk until the eggs have doubled in volume, about 2 minutes. Take the pan off the heat and whisk in the lemon juice.

3. Slowly whisk in the hot butter, a little at a time. The sauce should be quite thick and fluffy. Taste and beat in a pinch or so of salt and a bit of cayenne. Serve warm or at room temperature.

My favorite way to serve/eat asparagus. (I hope you've seen my entry on Mary Randolph's Asparagus Soup on my Hearthside Cooking page, Damon...)