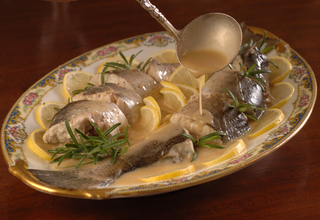 To Boyle a Trout, or Poached Trout Steaks with Rosemary, Ginger, and White Wine. Photo by John Carrington, from Classical Southern Cooking
One of the amusing things about the today’s culinary community is its assumption (or should I say presumption?) that we, being smart, inventive, and modern, have made great strides over the cookery of our past, which was naïve, crude, and, well, just plain archaic and weird.

Someone is naïve, all right, but it’s not the cooks of the past. There is only one way to counter that kind of presumption, and that’s by offering a recipe that shows great culinary wisdom, finesse, inventiveness, and charm. And age—more than three hundred and fifty years’ worth.

“To Boyle a Trout

Cut ye* trout in pieces, then boyle it in white wine, sum butter, as much salt as will season it, & a little rosemary, some grated or sliced ginger. when it [is] boyled, serve it up with sops layd in ye bottom & sides of ye dish.”

— A Booke Of Cookery (Popularly known as Martha Washington’s Booke of Cookery), p. 89, as transcribed with commentary by historian Karen Hess in 1980

* “ye” is a now archaic abbreviation for “the.”

Actually a Custis family heirloom, this manuscript came by its popular name because it belonged to Martha Washington for half a century, from her marriage to Daniel Custis in 1749 until she passed it on to her granddaughter, Eleanor Parke Custis, in 1799.

Written or at the very least copied out from another book long before Mrs. Washington was born, this manuscript can have had little to do with Mrs. Washington or the cooking that she ordered from Mount Vernon’s busy kitchens. Mrs. Hess dated it (or the book from which it was copied) no later than mid-seventeenth century, since the style of the recipe writing and cookery described are late Elizabethan and Jacobean. Nonetheless, this book is interesting for American food historians in that it shows the foundation on which much of early Virginia cookery was built.

But never mind its history; this is a lovely recipe that not only upends those presumptions about the crudity of historical cookery, but holds its own among the “inventive” cookery that is running amok today. Only two notes for modern cooks are in order. First, boil was used loosely in those days to describe everything from a gentle poaching simmer to a rolling gallop. A gentle poach is obviously what is intended here. Sops (also called sippets) are pieces of bread fried or toasted until quite dry so that they held onto some of their texture when used to sop up the liquid.

I’ve made only one change: instead of lining the platter with toasted bread, I make a sauce of the gorgeous poaching liquid by reducing and then finishing it with a butter liaison just as you would a classic beurre blanc. While not part of the recipe, it’s in keeping with the spirit of the recipe and with known practice.

1. Rinse the fish, pat dry, and put them in a deep, lidded skillet or sauté pan that will hold them in one snug layer. Add enough wine to completely cover them, then lift them out and set them aside.
2. Add 3 tablespoons of butter, a healthy pinch of salt, and the rosemary and ginger to the pan. Turn on the heat to medium-high, bring it to a good boil, and let it cook for 3 or 4 minutes to permeate the wine with the aromatics but not long enough for any of it to evaporate.

3. Add the fish and let it come back to a simmer, but don’t let it boil. Reduce the heat to an imperceptible simmer, cover, and gently poach until the fish are just cooked through, about 4 minutes. Do not let them overcook. Transfer the fish to a heated platter.

4. Raise the heat and bring the poaching liquid to a vigorous boil. Stirring frequently, let it boil until it reduced to about half a cup. Remove and discard the ginger and rosemary. (If you have used dried leaves, leave them in for now and strain the sauce through a wire mesh strainer at the end.) Freshen it with a squeeze or two of fresh lemon juice, and off the heat (or over very low heat) swirl or whisk in the remaining butter a little at a time. Spoon a little of the sauce over the fish and transfer the remainder to a warm sauceboat. Garnish the fish with lemon wedges and sprigs of fresh rosemary. Serve immediately, passing the sauce separately.
Be the first to comment