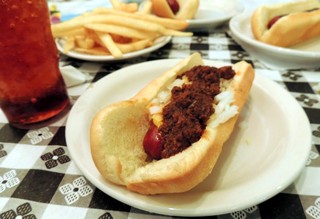 My father's favorite meal, a "good hotdog" and sweet tea, at The Dixie in Petersburg, VA, the kind of Mom-and-Pop joint that he taught me to love.

On this Father’s Day, it occurs to me that while I frequently write about my mother, grandmother, and occasionally my maternal grandfather and their influence on my career as a writing cook, I rarely mention my father. And yet, his integrity, his strong ethics, his wry sense of humor, and his unique way with words are all an indelible part of my own voice as a writer and teacher.

But lately I’ve begun to realize that his influence hasn’t stopped at words. Although he’s only an occasional cook and to this day has a simple and straightforward palate, it has occurred to me that he’s had a substantial role in shaping me as a food lover and cook.

His tastes, as I say, are simple: a boyhood fondness for “a good hotdog” (a rare treat for poor families during The Depression) remains as strong at eighty-eight as it was when he was a lad of eight. And it’s always a “good” hotdog, even though, so far as I know, he has never encountered one that he would’ve deemed “bad.” His bean soup, an understated and yet perfectly balanced comingling of pinto beans, ham broth, and onion, remains the standard by which I measure all others, including my own.

In my childhood, before fast food chains overran the thousands of Mom-and-Pop diners that once anchored every Main Street in the South, my father knew where all the really good joints were to be found. They were places like the steak house in the shadow of the Capitol in Columbia where perfectly-grilled rib-eyes were served up on garlic toast. And the Greek-American diner near the state veteran’s hospital whose kitchen served with equal aplomb old-fashioned Southern meat-and-three’s, baklava, and cinnamon-scented pastitsio. There was a little seafood place in Charleston that turned out perfect fried oysters and onion rings so fat and golden that they could’ve been worn one like a coronet.

Not only did he take me to these places—often just the two of us—he let me order whatever caught my fancy. And when I moved to Savannah, his first and only advice was to waste no time finding Gottlieb’s Deli, where he said I’d find the best pastrami-on-rye in at least four states.

Those excursions fed—and satisfied—my curiosity about food. But they also fed my spirit and palate in a way that I am only now, half a century later, beginning to understand.

It’s because of my Dad that I was able to go to Italy to begin with. But I’m just now realizing that it’s also because of him that I looked at the guys in our group as if they had two heads when they started moaning about how much they missed American burgers and said, “Are you crazy? This place has fried calamari and spaghetti with clam sauce!”

In short, looking back has made me realize that, when I am tired and homesick and start to crave an all-the-way chili-dog, this nut did not fall far from the tree after all.