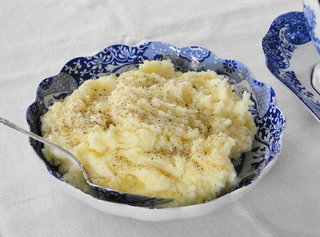 For some reason, Thanksgiving dinner tends to be a feast of starches: there’s that quintessential dressing/stuffing, yeast rolls, sweet potatoes, flour-thickened gravy, pastry, and often even cake. My own family also had baked macaroni and cheese. And just in case that’s not starch enough, many families throw in mashed potatoes. And what could be better? Fluffy, cloud-like, and meltingly tender, they’re the ultimate comfort on a fork.

Unfortunately, there’s all too often nothing really comforting about them—let alone fluffy and cloud-like, because the potatoes either came from a box (because someone has bought the propaganda that they’re easier, foolproof, and “just as good as homemade”) or they’re stiff and heavy, resembling not so much a cloud as old library paste—in which case, the cook will decide its not worth the mess and trouble, and resort to the boxed variety next year.

There’s no reason to give up on the unmatched satisfaction of homemade mashed potatoes when there are a few simple tricks that will not only guarantee perfection every time, they’ll make it almost as simple as stirring up flakes from a box.

The first trick is to put away your food processor or electric mixer. These machines may seem like the perfect thing for cutting this job down to size, but their power is the very reason not to use them. The tool you want is a potato ricer—a gadget that looks like an over-sized garlic press.

Shirley Corriher, who has probably forgotten more than most of us ever knew about the why’s of kitchen mishaps, explains the science behind it in her book Cookwise.

As starch granules are cooked, they swell, and if they’re allowed to rupture—or are ruptured by vigorously beating them, they explode into the liquid, essentially creating the same substance as library paste.

That’s where the potato ricer comes in. Forcing the cooked potatoes through the holes of the ricer ruptures fewer of the starch granules and creates a softened mass that is far less likely to be overworked when you mix in the butter and milk.

I’ve found that adding the butter first also helps keep the starches in check, rather the way that sautéing rice in fat before steaming it keeps the grains separate. Even so, it’s still important not to over-beat the potatoes when you start adding the milk.

As an added precaution, precook them (preferably whole in their skins) in water that is at a bare simmer, until they’re just done, and then let them cool before finishing them. This sets the starches, so that when the potatoes are reheated to finish the cooking and mashing, they remain stable and won’t dissolve into the liquid, creating the stiff, gluey texture you want to avoid.

3 pounds of russet, mature red-skinned, or gold potatoes of a uniform size
4-8 tablespoons warm, melted unsalted butter (how much is up to you)
About ½ cup hot milk
Salt

1. Wash potatoes under cold, running water, scrubbing without breaking skin, and put in a large pot. Add enough water to cover by 1 inch. Remove potatoes, cover pot, and bring water almost to boil over medium heat. Add potatoes. Reduce heat to a slow simmer and cook about 30 minutes, until just cooked through. Drain, cool enough to handle them, then peel and slice them. Cover and set aside. You can make them up to this point a couple of hours ahead.

2. When ready to finish and mash them, put potatoes through a ricer back into pot. Place over medium low heat. Add the butter and stir until incorporated and let the potatoes warm. Gradually stir in the hot milk until fluffy and creamy to your taste. Add salt to taste and stir well. Let heat a moment, stirring occasionally, and serve warm.