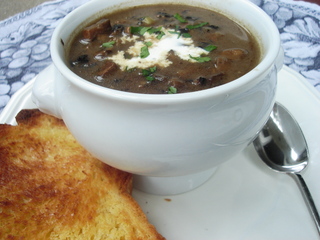 Thick, rich Mushroom Soup made with both fresh and dried mushrooms and broth, cream is only added as a garnish at the end

After my recent newspaper story on fall mushrooms, several correspondents asked about a good recipe for mushroom soup, since one wasn't included in the story. I went looking to see what might turn up in some the early American cookbooks in my collection, and to my surprise, found only this simple recipe in The Carolina Housewife:

Put about a pint of mushrooms, well cleaned and washed, and cut into small strips, with three ounces of butter, into a sauce-pan, over the fire; let them stew until they fall in. To this put two quarts of bouillon, and let the whole boil together half an hour. You may thicken with the yolk of an egg and some parsley; add some nutmeg. Pour the mixture over toasted sippets of bread. Either dried or fresh mushrooms may be used. If the former, they must be boiled first an hour in fair water, so that they may be softened and freed from sand.---German Receipt.

One of several recipes that seem to have been gleaned during Miss Rutledge's travels in Europe, it's telling that she called it a German receipt; while American cookbooks of the period--and the English ones popularly used in America--all included recipes for mushrooms simmered in butter, broiled over hardwood, baked, and stewed in gravy (which amounted to a thick soup), actual recipes for mushroom soup were rare.

Well, that's ancient history; in more recent times, cream of mushroom soup has been made commonplace and even vulgarized by the over-use of the condensed stuff in those open-and-dump casseroles that became so popular in the 1950s. Nonetheless, it has been a favorite of mine since early childhood, and I've never tired of it. Now that it's finally soup weather here in Savannah, it seems like the perfect time to rectify that omission from my newspaper story. Yesterday there just happened to be some reconstituted dried mushrooms and meat broth leftover from my cooking class last week, inspiring

Put the dried mushrooms in a heatproof bowl or glass measuring cup. Bring 1 cup of water to a rolling boil and pour it over them. Let them steep until softened, about half an hour. Carefully lift them out of their soaking liquid, dipping to loosen any sand that may be clinging to them, and roughly chop them. Strain their soaking liquid through a paper towel, coffee filter, or piece of un-dyed muslin and reserve it. Wipe the fresh mushrooms with a dry cloth and dice them.

Make a little beurre manie by kneading the flour into 2 tablespoons of the butter. Melt the remaining butter in a heavy-bottomed, 3-quart saucepan over medium heat. Add the shallot and saute, tossing often, until it is pale gold and translucent, about 3-5 minutes. Add the garlic and toss until fragrant. Add the reconstituted dry mushrooms and stir until they are sizzling and dry. Add the fresh mushrooms and toss until they have evenly absorbed the butter. Continue cooking, stirring often, until they are wilted and beginning to color. Season liberally with salt and pepper and toss. Slowly add the reserved mushroom soaking liquid, bring it to a boil, and then add the broth. Bring it to a simmer and cook, stirring occasionally, until the mushrooms and shallots are tender. Add the beurre manie in bits, stirring, and let it simmer until lightly thickened. You may stir in cream at the end or simple dollop a little cream into each serving.