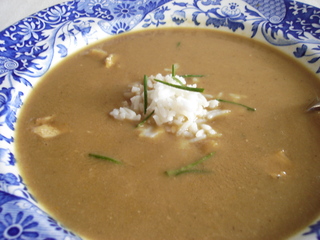 Mulligatawny, as interpreted by Shannon Hayes in her forthcoming cookbook

One never knows what will catch the imagination and send one down the rabbit hole of history. Over the last few months, it has been my privilege to edit a lovely little cookbook called A Long Way on a Little, written by friend and colleague Shannon Hayes, a farming food writer from upstate New York whose family farm specializes in all natural, pasture-raised animals.

Focusing mainly on the tougher and often less popular cuts from these animals, this charming book is filled with interesting old recipes that are rarely seen any more. The one that caught my attention and sparked that tumble back into history was a sumptuous rendition of that old fashioned Anglo-Indian soup, Mulligatawny.

The name derives from “milakutanni” (sometimes spelled “mullagatanni”), Hindi for pepper water, and that’s exactly what it is: broth highly seasoned with curry spices and finished variously with coconut, cream, meat or poultry, and rice.

Introduced to Britain by the colonials who occupied India, it became quite popular and quickly assimilated into British cookery (according to Jane Garmey, printed recipes appear as early as Dr. William Kitchiner’s classic The Cook’s Oracle in 1817).

Over time the dish was adapted and evolved to suit English taste, and today there are many variations, from casual and hearty stews with whole joints of rabbit or fowl, to elegantly formal purees studded with diced cooked meat and garnished with apple, cucumber, and rice.

Designed as a vehicle for leftover meat, Shannon’s version is a little of both:

Melt the butter in a large saucepan over medium heat and when it is hot and the foaming has subsided, add the onions. They should make a pleasant sizzle as they hit the butter, but if they sputter and splatter, lower the heat. Stir well to evenly coat them with the fat. Cook, stirring often, until the onions have wilted and started to color. Lower the flame and cook, stirring often, until they are caramelized to a deep, rich gold, about 8-10 minutes longer.

Add the garlic, celery, carrot and apple. Sauté, tossing, until the garlic is fragrant and the vegetables and apple are hot through, about 2 minutes, and stir in the garam masala, coriander, turmeric and cayenne. Add the lentils, sauté 1 minute longer, then stir in the broth and bay leaves. Bring to a boil and then lower the flame until it is just at a simmer. Simmer 20-30 minutes, until the lentils are tender. Turn off the heat and let cool slightly.

Discard bay leaves and rub the soup through a fine wire mesh sieve or puree it in batches with a blender, food processor, or hand-held blender. Return it to the saucepan. Stir in the coconut milk and cooked meat. When ready to serve, bring it just to a simmer, stirring often, and stir in the lemon juice. Remove it from the heat and serve it immediately with a generous spoonful of rice added to each portion.

It’s a lovely recipe, elegant enough for a formal dinner, but comfortable and hearty enough for a family supper. It’s also a little unusual (at least, in the West) with that thickening provided by pureed lentils and luxurious dose of coconut milk. However, it did make me wonder how much it had changed from those early nineteenth-century English versions; as it turned out, aside from the lentils and apple, not all that much.

Dr. Kitchiner’s book is not in my library, and I no longer have ready access to a copy, so I turned to Eliza Acton, who was to early nineteenth century Britain what Elizabeth David was to post-war Britain in the nineteen-fifties. Her recipe, while more involved, was not below the surface all that different from Shannon’s. Even coconut had a part.

Slice, and fry gently in some good butter three or four large onions, and when they are a fine equal amber-colour lift them out with a slice and put them into a deep stewpot, or large thick saucepan; throw a little more butter into the pan, and then brown lightly in it a young rabbit, or the prime joints of two, or a fowl cut down small, and floured. When the meat is sufficiently browned, lay it upon the onions, pour gradually to them a quart of good boiling stock, and stew it gently for three quarters of an hour to an hour; then take it out, and pass the stock and onions through a fine sieve or strainer. Add to them two pints and a half more of stock, pour the whole into a clean pan, and when it boils stir to it two tablespoonsful of currie-powder mixed with nearly as much of browned flour, and a little cold water or broth, put in the meat, and simmer it for twenty minutes or longer should it not be perfectly tender, add the juice of a small lemon just before it is dished, serve it very hot, and send boiled rice to table with it. Part of a pickled mango cut into strips about the size of large straws, is sometimes served with this soup, after being stewed in it for a few minutes; a little of the pickle itself should be added with it. We have given here the sort of receipt commonly used in England for mulligatawny, but a much finer soup may be made by departing from it in some respects. The onions, of which the proportions may be increased or diminished to the taste, after being fried slowly and with care, that no part should be overdone, may be stewed for an hour in the first quart of stock with three or four ounces of grated cocoa-nut, which will impart a rich mellow flavour to the whole. After all of this that can be rubbed through the sieve has been added to as much more stock as will be required for the soup, and the currie-powder and thickening have been boiled in it for twenty minutes, the flesh part of a calf’s head, previously stewed almost tender, and cut as for mock turtle, with a sweetbread also parboiled or stewed in broth, and divided into inch-squares, will make an admirable mulligatawny, if simmered in the stock until they have taken the flavour of the currie-seasoning. The flesh of a couple of calves’ feet, with a sweetbread or two, may, when more convenient, be substituted for the head. A large cupful of thick cream, first mixed and boiled with a teaspoon of flour or arrow-root to prevent it curdling, and stirred into the soup before the lemon juice, will enrich and improve it much.

She went on to explain that for “elegant tables” only the choicest joints of the rabbit or poultry should be served, and that they must be boned before they were added to the tureen and sent to table.

The apple came a bit later, but it’s usual in most modern British versions – sometimes included in the soup as Shannon did, but more often as a finishing garnish.