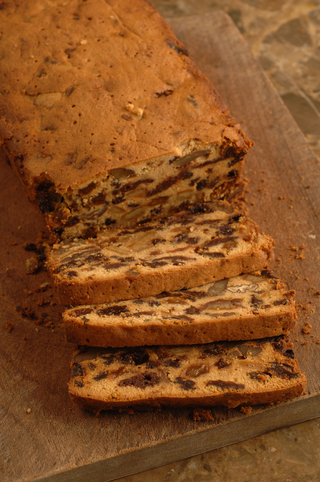 It may be hard for the jaded comedians of our day to believe, but there actually was a time when fruitcake was well-loved, and got all the respect it really deserved.

Rich with rare and expensive dried and glacéed fruits and nuts, heady with brandy, sherry, and rare spices, it was, until well into the nineteenth century, the ultimate celebration cake for virtually every occasion, even (and especially) weddings, where its fruit-packed crumb symbolized the hope that the marriage itself would be fruitful.

It was, however, at Christmastide that fruitcakes were prized the most. That was partly because their richness befit the exuberance of the season, and partly because they not only kept well, making them the perfect treat to have on hand for drop-in company, but actually got better with age: by Twelfth Night a properly aged fruitcake was even more moist, aromatic, and delicious than it had been on Christmas Day.

Part of the reason this lovely celebration cake was better appreciated back then was because its components were expensive and involved a lot of tedious back preparation. There were no seedless raisins and currants or ready-shelled nuts; commercially candied fruit was rare and precious when it could be had at all. Refined sugar came molded in cone-shaped loaves, and cinnamon and nutmeg were sold whole. In the larder, the butter was heavily salted as a preservative, and the contents of the flour bin was often questionable.

Raisins and currants had to be painstakingly plucked from their stems and stoned by hand, the nuts had to be shelled and picked, the orange peel cut from its fruit and candied at home, and the sugar and spices had to beaten to a powder and sifted. Butter had to be washed to rid it of excess salt and the flour had to be sifted (often to remove critters), aired, and sometimes even dried in the oven.

Then there was the care that had to be taken to properly hydrate and spike the fruit, blanch the nuts, cream the butter, and regulate the wood-fired oven so that all that work didn’t go literally up in smoke. After all that, the cakes still had to be stored and aged in a way that protected them from pilfering varmints—not only of the two, but of the four- and six-legged kind.

Even if those fruitcakes had not been the heady ambrosia that they were, they would have been treasured at the very least for all the effort and expense that went into them.

Compare such a cake with the sad specimens that all too often occupy today’s holiday table, with their luridly colored, achingly sweet, and yet surprisingly flavorless candied fruits, their hydrogenated fat, and dull, lifeless crumb. The wonder is less that they’ve become the target of comedic derision than that they still exist at all.

A really good fruitcake is still a lot of work, but happily not the work it was in the old days, thanks to the ready availability of commercially stoned and quality glacéed fruit, shelled nuts, fine granulated sugar, reliable flour, and unsalted butter that need only be softened. And its joys far outweigh the effort.

At the risk of sounding like a saccharin movie trailer, this holiday season, take a little time to rediscover the magic of a true holiday classic.

1. Put the raisins, currants, cherries and candied orange peel in a heat-proof, non-reactive metal or glass bowl. Bring a teakettle full of water to a boil and pour it over the fruit. Let it stand 10 minutes and thoroughly drain it. Pour the bourbon over the fruit and toss well. Let cool, then cover and set aside to macerate for at least an hour, overnight is better. The whiskey should be almost completely absorbed.

2. When you are ready to proceed, position a rack in the center of the oven and preheat the oven to 325° F. Lightly grease 2 tube cake pans or 4 9-inch loaf pans and dust one lightly with flour, shake gently until it is evenly coated, then shake out the excess into the next pan and repeat until all the pans are coated.

4. Lightly sprinkle the fruit with flour and toss until it is coated. Fold the fruit and nuts into the cake batter until uniformly distributed. Spoon the batter into the loaf pans, then firmly tap each on the counter several times to force any air bubbles to the surface and help insure an even texture.

5. Bake in the center of the oven, making sure the pans don’t touch one another, for about 1½ hours without opening the oven, then begin checking the cakes and continue baking until they are beginning to separate from the sides of the pan and a straw stuck into the center comes out clean. The tube cake will be done in about 2 hours; loaf cakes may take a little less time. Turn off the oven and let the cake cool in the oven. Let the cake cool completely before removing it from the pan.

6. Soak cheesecloth or clean, un-dyed muslin in bourbon, wring out thoroughly, and wrap them around the cakes, then drizzle a little more bourbon over them. Put them in airtight tins or wrap tightly with plastic wrap and let them age for at least 2 weeks before using them.