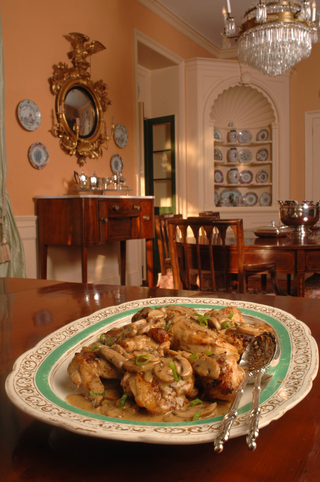 Chicken Kentuckian on the sideboard of a late eighteenth century dining room. The silver belonged to Fr. Ralston. Photography by John Carrington
At the Association of Food Journalists’ conference in Charleston earlier this month, four of us participated in a panel about Gullah cooking, the cuisine of Lowcountry residents of mostly West African descent. The core of the panel was a pair of women who were Gullah, author and cultural anthropologist Vertamae Grosvenor and Chef Charlotte Jenkins; Jeff Allen and I rode shotgun as outsider journalist and historian on either side.

The main task was to define Gullah cooking and address whether or not its present incarnation was authentic.

During the question and answer period, a man lamented that Gullah culture had been entirely obliterated by twentieth century development of the barrier islands of Carolina and Georgia.

This even though two Gullah women were sitting right in front of him.

His remark, however, did bring the real issue into focus: it forced the acknowledgment that the discussion had been less about definitions and context than authenticity within the framework of history. Had the Gullah community ceased to exist because its people had changed and adapted to cultural encroachment, and was their cooking, both in the Lowcountry and in the diaspora, still “authentic” in the face of these cultural adaptations?

If you think on that for half a minute, you’ll answer yes, of course it is—as authentic as it was three hundred years ago when the West African slaves who founded this culture first adapted their rice based cuisines to incorporate new ingredients such as cornmeal, beans, and salt pork. To argue otherwise would be like arguing that Italian food has not been authentic since the sixteenth century, when chocolate, coffee, corn, beans, tomatoes, and zucchini were introduced from the New World.

The only constant in life is change. When confronted with that constant, civilizations have three choices: move, adapt, or die. A cuisine that adapts to the forces of change is simply following a natural continuum that began the day the first men and women learned that holding food over a fire did good things to it.

The history of cooking is not a series of contained plateaus ascending like stairs but a free-flowing river that picks things up along the way, has things thrown into it, and in turn tosses things onto its banks and leaves them behind.

The logical illustration of this would be something from a Gullah kitchen; but as Jeff obligingly pointed out to our audience (and as you will readily notice from my picture), Gullah cookery is not part of my heritage.

A dish that is a part of it, that has been on my mind ever since the season turned, is Chicken Kentuckian, a handsome sauté of young chickens basted with bourbon and finished with mushrooms and cream.

It came to me from my former minister, the late Rev. William H. Ralston. Its lineage in his Kentucky family goes back at least to his grandmother, who made it with the family’s young yard chickens, rough homemade whiskey, and mushrooms that had been gathered in nearby horse pastures.

Fr. Ralston used a chicken from the market, refined distillery-brewed whiskey, and white button mushrooms. Though I routinely use the same whiskey that he did, my original rendition added dried porcini mushrooms to lend the earthy depth of the wild mushrooms his grandmother used. In more than twenty years of making it, subtleties that I’m not even conscious of have crept into the pan, making it uniquely my own.

Which version is the most “authentic?” All of them are. No, Fr. Ralston’s probably was not quite like his mother’s and certainly not his grandmother’s, and mine is no longer quite like his, just as your interpretation will eventually become uniquely your own.

Will what you taste be what Fr. Ralston’s grandmother did a hundred years ago, or what he did a mere two decades ago, or even what I do today? No. But will you still be experiencing an authentic taste of history? You bet.

1. Wash the chickens, pat dry, and spread them on a platter. Lightly dust with salt and flour. Wipe the fresh mushrooms with a dry cloth and slice them thickly. If using dried mushrooms, put them in a heatproof bowl, pour 1 cup of boiling water over them, and soak until cooled.

2. In a large, heavy skillet that will hold all the chicken without crowding, heat the butter and olive oil over low heat. Add the chicken and chopped scallions and sauté, turning frequently, until it is golden and tender, about half an hour. While it cooks, baste every few minutes with spoonfuls of the bourbon, being careful to add it in small amounts so there is never any liquid accumulated in the pan: it should sauté, not steam. When the chicken is cooked through and golden and all the bourbon has been used, remove it to a warm platter.

3. Turn up the heat to medium high. If using the dried mushrooms, lift them out of their soaking liquid, dipping to loosen any sand that is clinging to them, and put them in the pan. Filter the soaking water through a paper towel or coffee filter and add it to the pan. Bring to a boil, stirring frequently, and boil until all the liquid is evaporated. Add the fresh mushrooms and sauté, tossing constantly, until beginning to color, about 3 minutes.

4. Add the cream and scrape loose any residue that may be stuck to the skillet. Simmer until just heated through and starting to thicken, about 1-2 minutes, depending on the richness of the cream. Taste the sauce and correct the seasonings, pour it over the chicken, and serve at once.