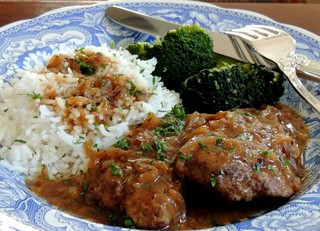 Likewise, the most useful thing to know about Southern Cooking “is that, as such, it actually doesn’t exist.” As is true for Italian cooking, it also is not, and never has been, a single, homogenous cuisine.

The South, just like Italy, is a study in contrasts, amplified by its sheer size, which is more than five times that of the Italian peninsula. Until The Civil War ended arguments over our central government, this region was composed of a loose confederation of states that more or less saw themselves as independent. Though bound together by common economic interests each state had its own culture, dialect, and cooking. Often, there are further differences in those elements from one end of a state to the other. And that’s without factoring in the social divisions and harsh undercurrents of racial and ethnic tensions that were the ugly fallout of more than two centuries of legal slavery and another century of legal segregation.

The startling contrasts of climate and terrain that divide Italy also divide the South, not just across state lines, but within them. Except for the interior states (Tennessee, Kentucky, West Virginia, and Arkansas), which have their own unique divisions, each state has rugged mountains, a fertile central plain, and balmy coastline.

The part of the South where I was born and raised was the rolling, red-clay hills of upstate Georgia and South Carolina; the part of the South where I’ve lived most of my adult life is Georgia’s moss-draped, marsh-laced Lowcountry, a place of black, sandy soil as flat and regular as a table-top. Though the distance between them is barely three hundred miles, their climatic, terrestrial, and cultural differences couldn’t be sharper if they were separated by an ocean.

And that’s without getting into the ethnic diversity from five centuries of immigration.

In short, this region we call “The South” is a complicated patchwork. To suppose that the cuisine across that patchwork could be an homogeneous unit is naïve. It cannot be summed (as has so often been attempted) in a glass of sweet tea, bun-full of pulled pork, and platter of fried chicken any more than one could sum Italian cooking with a glass of Chianti, slice of pizza, and platter of marinara-topped spaghetti.

One key common ground is that all the cuisines under the Southern Cooking blanket, from the exuberant Cajun cookery of the Louisiana Bayou to the forthright, humble fare of Appalachia and refined, seafood-enriched, rice-based cuisine of the Carolina and Georgia Lowcountry, have come out of home kitchens. Despite the posturing of some professionals, the foundations of these cuisines have had nothing to do with restaurant cooking—not even in New Orleans.

On those foundations, each cuisine has evolved organically over centuries, sustained and nourished by simple techniques and remembered flavors that have passed from generation to generation—mother to daughter, father to son.

The other key is that the South has traditionally been an agrarian economy, so all its cuisines have remained close to the land, even after radical, massive urbanization in the last quarter of the twentieth century swept across its pastoral landscapes like Sherman’s Army.

The farm-to-table movement that has become fashionable among professional cooks is nothing new to Southern home cooks. The farmers’ markets that have sprouted in our urban centers, once again making local, freshly-harvested produce readily accessible to those without garden plots or so much as a gardening relative, are not a new idea, but a welcome return to an old one.

All that is why, until recently, the many cuisines of the South, like those of Italy, have remained singular and territorial, and why they remain solidly grounded in the face of a flood of new ideas and ingredients unleashed by our age of mass media and by new immigrants to the South. As the cooking continues to evolve it still remains rooted in the land and in the ageless patterns that have been a part of our home kitchens for more than three centuries.

This cooking comes from people who have a comfortable sense of who we are, who have no interest in being fashionable, trendy, or clever. Even better, we have no interest in “re-inventing” anything. When we embrace a new ingredient, technique, or dish, it’s because it rings true to the traditions passed down by our ancestors.

All that is to say that the only way to understand Southern cooking as a whole is to understand its individual regional cuisines. What a Louisianan calls gumbo is not what goes by that name in coastal Georgia or, closer to home, what a Carolina Lowcountry cook calls Hoppin’ John is not what would go by that name in the Carolina hill country or even the Georgia Lowcountry.

As this series continues, we’ll begin by looking at some of the key elements of those many regional cuisines. It’s probably not possible to cover them all: If nothing else, I’ve not been lucky enough to experience all of them first hand. But there are fine books on many of them, and wise writers like Ronni Lundy (with her luminous book, Victuals) who are addressing cuisines that up to now have barely been acknowledged.

As long as we keep in mind the complex diversity of Southern cooking, we can at least come to see that understanding and preserving this cuisine is bigger than arguing over sugar in cornbread.

Parts of this essay are excerpted and adapted from Essentials of Southern Cooking (Lyons Press), copyright ©2013 by Damon Lee Fowler, all rights reserved.