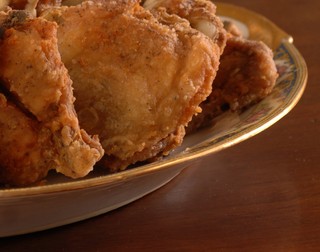 Since tomorrow (21 June) is the first day of summer, it seems like a good idea to visit one of the great icons of the Southern table—fried chicken. Surely no one would argue with that. But it has become so commonplace and universal that most of us, Southerners included, have completely forgotten that it was once a seasonal delicacy, something that could only be had in the spring and summer, the only time of year when very young, tender chickens could be found in the barnyard. Nowadays, because of the way chickens are raised, it can be had year round, and we’ve lost a sense of that seasonal wonder.

Never mind all that: just don’t let a summer pass without at least one batch of home-fried chicken in your picnic basket or on your Sunday Dinner table. The following, excerpted from my latest cookbook, Essentials of Southern Cooking, is how I prepare it in my own kitchen.

Nowhere is the eclectic nature of my cooking (and of Southern food in general) given away more fully than in the way I fry chicken these days. In it are combined both sides of my family’s traditions, two years of research into a book on fried chicken from all over the world, and a lifelong love affair with Italy.

The saltwater soak (from my paternal grandmother) makes for tender, juicy chicken; the buttermilk bath (from my maternal grandmother and mother) further enhances tenderness, gives the chicken a lovely flavor, and ensures a crackling-crisp crust that will stay that way even after the chicken is cold; and the garlic whispers of the Mediterranean.

Yet everything—including that garlic—is consistent with deep Southern traditions. Before you begin, here are some basic notes on successfully frying chicken:

The pan does not (here come the letters) have to be cast iron, but it must have a very heavy bottom—and for that, of course, cast iron is the best.

The most important draining step occurs as you remove the chicken from the pan: Hold it over the pan until it no longer drips, then let it finish draining on a rack. If you must use absorbent paper to briefly blot the chicken, briefly is the operative word. Don’t allow the chicken to remain on paper for more than a minute. Otherwise, the paper will do what it does best—absorb the moisture from inside the chicken, resulting in a soggy bottom crust and dry chicken.

Though modern health regulations preach against it, the chicken should be allowed to lose the deep cold from the refrigerator or it will not cook evenly, inviting salmonella poisoning more readily than leaving it sitting out. Allow it to sit at room temperature for 15–30 minutes, and make sure that you cook it thoroughly.

1. Put the chicken in a glass or stainless-steel bowl. Sprinkle a handful of salt over it and cover completely with cold water. Toss gently until the salt dissolves. Let the chicken soak, refrigerated, for at least 2 hours or as long as overnight.

2. Drain the chicken, discarding the brine, and pat dry. Pour the buttermilk over it (or if you are using yogurt, stir it until it’s smooth and creamy and pour it over the chicken). Turn the chicken until well coated. Add the garlic and a generous sprinkling of the hot sauce. Toss until the sauce is mixed into the buttermilk. Let marinate for 30 minutes to an hour.

3. Combine the flour, a small handful of salt, and the pepper in a large paper or ziplock plastic bag. Fold over the top to close it tightly and shake until well mixed. If you are serving the chicken hot, position a rack in the center of the oven and preheat to 150°F (or the warm setting). Fit a wire cooling rack into a rimmed baking sheet. Put enough lard or oil in a large, deep, cast-iron skillet or enameled iron Dutch oven to come halfway up the sides. Heat over medium-high heat until very hot but not quite smoking, about 375°F. Beginning with the thighs and drumsticks, lift the chicken out of the marinade a piece at a time, allowing the excess to flow back into the bowl, and drop the pieces into the bag of seasoned flour. Fold over the top and shake until the chicken is well coated. Lift them out, shaking off the excess, and slip them into the pan.

4. Fry until the outside is well sealed and beginning to brown, turning the chicken once. Reduce the heat to medium and continue frying, maintaining the fat temperature at 325°F, until the chicken is just cooked through and golden-brown, about 25 minutes for the thighs and drumsticks, 20 minutes for the breasts and wings, turning halfway. Remove the chicken pieces as they are done, drain well, and lay them on the prepared cooling rack. If you’re serving it hot, keep the chicken in the warm oven.

Notes: You can deep-fry the chicken if you prefer; the chicken will be crispier and will take a little less time. Put enough fat in the deep fryer or deep, enameled iron Dutch oven to come a little less than halfway up the sides (never fill the fryer more than half full of fat) and maintain a steady temperature of around 350–365°F throughout the frying: about 15 minutes for breast meat, 10 minutes for wings, and about 20 minutes for the legs and thighs.

Feel free to doctor the seasonings, adding herbs (sage and thyme are traditional with chicken in the South—but chives, rosemary, oregano, and tarragon would all be compatible) and/or spices (ginger, nutmeg, cumin, and paprika all complement chicken nicely) as the spirit moves you. But don’t overwhelm the chicken with too much: There is nothing worse than the overblown taste of too many herbs and spices.

The name for this pan gravy is misleading, since it doesn’t actually have any cream in it. It’s probably a holdover from the original gravy that accompanied Southern fried chicken—true cream lightly reduced in the pan in which the chicken was fried. Such an extravagance was not always possible, and flour-thickened milk gradually replaced the cream. Today this gravy has a bad reputation with the gourmet crowd because when it’s badly done—and it sadly often is—it is gummy, lumpy, and unappetizing. Yet with care, particularly with the correct proportion of flour to milk, it can be a very good sauce.

2 tablespoons pan drippings from frying Buttermilk Fried Chicken (above), left in the skillet with the solid cooking residue
1 tablespoon all-purpose flour (you may use the leftover seasoned flour that you used on the chicken)
2 cups whole milk, preferably at room temperature
Salt and whole black pepper in a pepper mill

1. Turn on the heat under the skillet to medium and sprinkle the flour over the bottom of the pan. Stir it into the fat with a wooden spoon or whisk until smooth. Whisking or stirring constantly, slowly pour in the milk. Continue stirring, scraping loose the cooking residue that may be stuck to the skillet, until the gravy begins to boil and thicken. If you have not used seasoned flour, season with a large pinch or so of salt and several liberal grindings of black pepper.
2. Reduce the heat to low and simmer, stirring occasionally, until the gravy is as thick as you like it and the flour has lost its raw, pasty taste, about 4–8 minutes longer. If it should happen to thicken too much, thin it with a little water or milk and simmer another minute or so. Taste and adjust the seasonings. Pour the gravy into a warm sauceboat or serving bowl and serve at once.

How to Cut Up a Chicken for Frying:

Although chickens already cut up for frying are available in most markets, buy a whole bird and do it yourself. Not only is it cheaper, most butchers cut the chicken into pieces that are too large for even frying. It’s a simple operation. Joints in the muscle and fat leave natural guidelines that show you exactly where to cut. Once you get the hang of it, you’ll be able to do it in 2 minutes or less. Unless a recipe specifically says not to, skinning the bird is up to you. Some cooks prefer it; others insist that the chicken can’t be fried well if it’s skinned. If you opt to skin it, you can do it while the bird is whole or wait and skin each piece—whichever is easier for you.

First, remove the packet containing the giblets and neck and save for the next time you make broth. Lay the chicken flat on its back on the work surface and bend back a leg. Under the skin, you will see a line where the thigh muscles join the hip. Cut through this line, bend back and cut through the hip joint, and remove the entire leg. Lay it flat, outer-side down. You’ll see another line between the muscles of the thigh and drumstick at their joint. Cut through it with a cleaver or sharp knife. Set the thighs and drumstick aside. The wings have a similar ball joint at the shoulder. Cut through it and set the wings aside with the leg pieces.

The rib cage has joints up both sides where the back and breast rib bones meet. Cut through these joints and bend back the breast until the joints at the shoulder are exposed. Separate them with a cleaver or sharp knife. Turn the breast skin-side up. At the collarbone is the little Y-shaped bone that we call the wishbone. Reach under the collarbone and feel for the joints. Cut through them with a sharp knife, then find the joint at the neck end of the keel bone. Cut straight down at that point, cutting the wishbone piece away from the breast. Turn the breast over and, using a cleaver or heavy chef’s knife, chop through the keel bone and long, pointed cartilage. Unless you are working with a very small bird, chop each breast in half crosswise with a cleaver or chef’s knife. Traditional cooks split the back crosswise in half and fry it, too, but most modern cooks put the backs in the stockpot. Your bird is now ready to be fried.

I was hooked the moment I saw the picture. This recipe is in my queue to try. After your masterwork on fried chicken, I can't wait to try this!