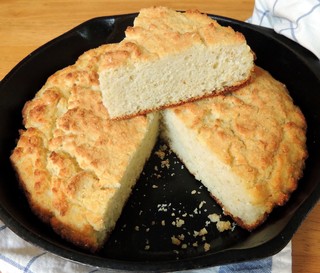 Skillet Cornbread the way God meant it to be: naturally sugar-free.
I don’t know what you’re doing on this late February day, but it cannot be better than what I’ve been doing: sipping piping hot double-concentrated homemade beef broth while laughing and crying my way through Julia Reed’s new masterpiece, But Mama Always Put Vodka in Her Sangria!

This morning dawned cold, wet, and gray in Savannah and I’ve been taking advantage of a rare day on my own to put a batch of said beef broth through one last simmer while reading Julia’s delicious prose as background for a newspaper story.

The chapter that strikes close to home for this Southern food writer is “The Great Leveler,” in which we are reminded why she is considered one of the foremost champions of the South’s cookery. It also points up why hundreds of writers have plunged into Southern food’s vat of riches and never hit the bottom.

The essay is a persuasive argument that Southern food is The Great Leveler, reducing differences between the South’s races and classes to one common table. It also points out how Southerners have the happy knack for reducing the cultural differences of foods we adopt into the menagerie, making them every bit as Southern as cornbread and corn whiskey. (Think Mississippi Delta hot tamales, which are no longer by any stretch of the imagination Mexican.)

It occurs to me that the only other collection of cuisines that shares this leveling quality on both fronts is Italian food—which is beside the point, but I can’t write about the Queen of the Digressers without digressing a little on my own.

This leveling and embracing does, however, have its limits. There are things that cannot be adapted beyond reason and still be called Southern. “For example,” she points out, “Southerners who put sugar in cornbread are imposters, or criminals, or both.”

That may seem a little harsh unless you have been raised on decent cornbread and have been subjected to one too many mouthfuls of sweet, puffy, cornmeal cake masquerading as bread. My first bite of the stuff brings sharp disappointment; the second, weariness; the third (if I get that far) downright annoyance. The only way to get it down is by chasing it with a stiff snort of corn whiskey.

Anyway, that remark brought back a recent, deeply uncomfortable moment when an otherwise sensible and lovable Southern cooking teacher was asked by a student why on earth she was putting sugar in the batch of cornbread she was in the process of mixing. She hesitated and, looking a bit taken aback, murmured awkwardly, “Well—it’s just a very Southern thing.”

Well, bless her heart (and y’all know what that means), I love her to pieces but, no, it is NOT a Southern thing. I nearly swallowed my tongue, and then almost bit it off trying to keep my big mouth shut. Sugar in cornbread is a thing that was once completely foreign to Southern cooking and, quite frankly, it ought to be again.

I suspect my friend knew better, and didn’t quite know how to back her way out of it. Anyway, she’s family—I have to give her the benefit of a doubt.

Here’s the thing: genuine Southern cornbread never had sugar in it before, and ought not to have it in it now. I softened that dictum somewhat in Essentials of Southern Cooking, but not my own resolve on the subject. I’m not saying you can’t sweeten your own cornbread if that’s what you want to do: I’m just saying you should not be calling it (or yourself) Southern.

And you should definitely not ask me to eat it—even with a bourbon chaser.

Here is my own version of traditional Southern cornbread. It isn’t the only bread made with cornmeal in our region: there are also hoecakes, muffins, cornsticks, and hot water breads, to name a few, but this is the one on which I was weaned, the one that my mother still makes for me whenever I make my way home. The only unorthodox change that she’s made over the years is to substitute olive oil for bacon drippings.

Makes 1 10-inch round skillet cake or about 16 cornsticks or muffins, serving 4 to 6

1. Position a rack in center of the oven and preheat to 400° F. Heat a well-seasoned 10-inch iron skillet in the oven for at least 10 minutes. Meanwhile, sift or whisk together the meal, salt, baking powder, and baking soda in a mixing bowl. In a separate bowl, whisk together the eggs, buttermilk, and 2 tablespoons of the fat.

2. Make a well in the center of the meal and pour in the liquids. With a wooden spoon quickly stir them together, using as few strokes as possible. It can be a little lumpy, but should not be stiff: if it seems too firm, add a little more buttermilk.

3. Remove the heated pan from the oven and put the remaining fat. Quickly add the batter: it should sizzle as it hits the pan, or the pan isn’t hot enough. Bake in the center of the oven until golden brown and a toothpick inserted into the center comes out clean, about 30 minutes. Immediately invert the skillet over a plate and remove the bread. Serve piping hot with plenty of butter passed separately.

Here is the rule: I welcome your comments, even when they don't agree with me, but you may not be rude or disrespectful. This is my party, after all.